Spotify Crashes when trying to play a song!

Problem description:
Whenever I try to play a song after installing Equalify, Spotify crashes. Sometimes it throws an error and sometimes it doesnt.

Soundcard:
Roland Quad Capture. I have disconnected this and just used my onboard Realtek and same issue occurs. I never used to have this issue until Spotify updated.

Any special software or hardware you might have installed:
No other important software installed except for Kaspersky Anti Virus which I have tried to disable. Nothing changed.

I have tried to make sure Spotify is closed, I have uninstalled and installed the softwares in different orders, numerous amounts of times and tried restarting my PC and still can’t get it working.

Due to the error I got I even tried changing Spotify’s cache location just for kicks…didn’t change anything.

Sometimes I get an error and the error is this: 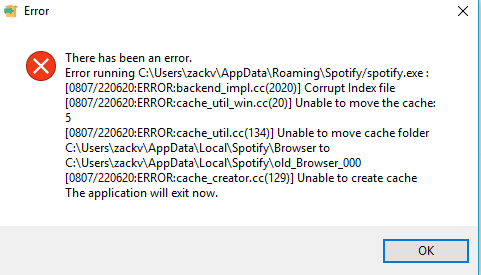 I worked out this issue.

For anyone else with the same issue, I had to change my default audio out for Windows, to one of my other devices before it would actually load. Then I could go back and change it back to something else…weird.

That error message is from spotify itself and is about the cache index file being corrupt, that has nothing to do with Equalify.

The fact that spotify crashed when trying to play a song is most likely an Equalify issue though.

Does Equalify load if you set the default audio device back to the one you originally had before starting spotify ?
And it all used to work fine with both soundcards before the last spotify update ?

Could it all be that the cache had been corrupted somehow during the spotify update and spotify crashed because of that when trying to play music, but not showing an error message?

That it worked after the audio device change might have been a coincidence ?

If it all used to work before the update i can not think of any reason for equalify to suddenly cause a crash.

I’m glad you got it sorted though, and thank you for sharing what worked for you!
Hope this doesn’t happen to anyone else!