Newby: I installed equalify but do'nt see anything in Spotify

Problem description:
I downloaded the newest Spotify to my desktop. Then downloaded and installed Equalify Pro (in the user-map/roaming/spotify). I opened Spotify and played a song but did’nt see anything that has to do with Equalify.

Are you sure you are using the regular desktop version of Spotify ?
Eqaualify does not work with the Windows Store version.

I looked in my Spotify account Help/about and here is a screenshot of what it says there: 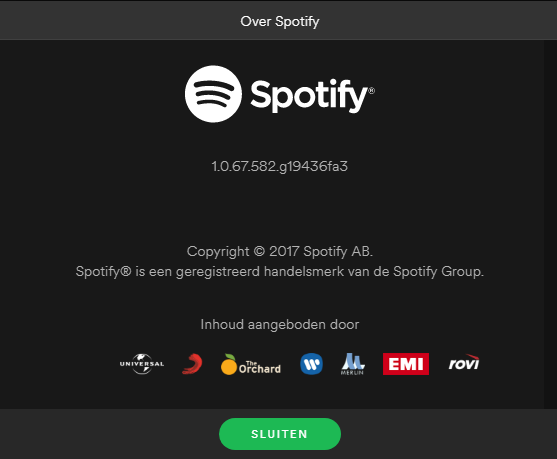 I think that is not the playstore version. Ik downloaded the desktop version from the Spotify-site. But I don’t see a Spotify folder in my Programs-folder. It is placed in my user folder and then in Roaming.

The roaming folder is correct.
And that is not the Store version.

What soundcard do you have in your machine ?

Have you looked at this thread: Incompatible hardware and software

The specs of my laptop say: Sound by Dynaudio 2.1

Could you please give me the full model name/number of your computer. That way i can look up all the stats

An educated guess is that one of the programs that is part of the dynaudio driver (probably this: https://www.msi.com/page/nahimic) is interfering the same way that the stock Asus Xonar driver.

Would you be willing to help test out the theory by uninstalling nahimic(2), restarting the computer and re-try the spotify installation ?

If not we can just do a refund of the purchase

It would be nice to verify if that is the problem though, for me and future users.

I uninstalled Nahimic, restarted my laptop and installed Spotify and Equalify again. Unfortunately no improvement

Thats sad. Thanks for trying though!

Yeah, sad that it doesn’t work. I should have liked it very much, I guess. Thanks for the great and quick responses on my question.

This topic was automatically closed 2 days after the last reply. New replies are no longer allowed.