Equalify won’t launch with spotify after a auto update changed it to the windows store version of the player.

I tried reinstalling both, spotify player and equalify with latest versions, i tried downgrading spotify to a older version but the installer downloads the latest version every time.

Please help, listening to music without the software is a pain.

Then reinstall Spotify (the desktop version) and Equalify and you should be back on the normal Spotify client with Equalify working. Also remember to play a song to check if the EQ has loaded

Hi, Thanks for the reply!

I understand that it shouldn’t “upgrade” by itself, but thats what its doing. I’ll list the steps i took:

I’m an IT professional, so i’m an advanced user, i’ve spent about one hour trying to troubleshoot this but couldn’t find any solution. I also looked for a “legacy” version of spotify but can’t find it.

I’ve been using equalify for a few years, it has always worked fine until the windows fall creator’s update, after that, spotify “upgraded” itself to store version and i can’t roll it back.

If necessary i can upload a screen recording of how i’m installing spotify to youtube and post it here. 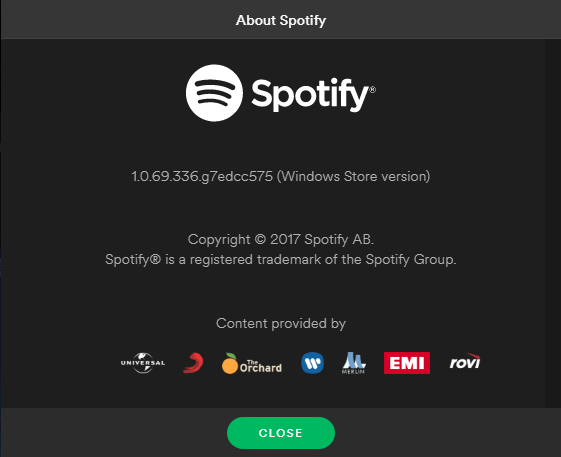 I am also on the fall creators update of Windows and i have the normal Spotify version installed.

I have also switched between the store version and desktop version on other machines regularly to test updates to the EQ and i’ve never had issues going back to the desktop version. I’ll fire up one of the test machines and investigate if something has changed with their latest installers.

What does the Windows store page for Spotify say? (install/open/get)

I’ve tested installing the version on the website, then installing the store version and uninstalling it and going back to the regular version a few times now. and i do not have any issues switching between them.

Could you try uninstalling Spotify, then going to %appdata%/spotify and make sure that folder is empty or non-existent.
You can also check %localappdata%/spotify

Also check %localappdata%/packages/ and look for a folder named SpotifyAB.SpotifyMusic_*
If that folder exists after you have uninstalled it means that the store version is still installed.

And if the uninstaller did not remove the Spotify shortcuts, remove them as well.

Then RE-download the installer from spotify.com/download
The correct installer as of today should be:
Named SpotifySetup.exe
Size 709KB
And have these details:

Install it and run Spotify again and check if it starts upgrading or migrating your account on launch.
If not you should be on the latest desktop version of Spotify.

I’ve followed the steps you gave me but still the same problem, the installer installs the store version, i’ve recorded the process and uploaded to youtube so you can take a look at it. 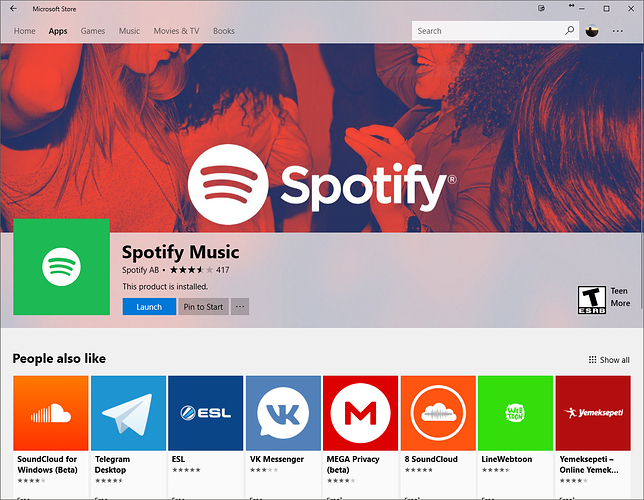 This makes no sense, the only way to install the store version should be through the windows store.

Try uninstalling spotify again and use this installer to install it: http://download.spotify.com/SpotifyFullSetup.exe

Weird that this is happening.

If @Notrace’s fullsetup.exe doesn’t work maybe you can try using IObit Uninstaller 7 to remove all bread crumbs, I use this for all my programs and seems to do a nice job.

Kind of weird that is happening, gotta love Windows!

I tried installing the fullsetup.exe but same thing, it installs the windows store version

I also tried @DigidyDOG 's idea, installed IObit Uninstaller but for some reason the software doesn’t even find Spotify as a installed program, probably because its a windows store app.

I’m going to open a thread in spotify’s support forum’s as well, i’ve looked thru their threads today but couldn’t find any posts related to this issue. Hopefully someone there has experienced the same or some staff knows what to do.

I appreciate all the help! I’ll keep this thread updated as the mystery unfolds haha

Tried to deactivate automatically Windows Store App Updates?
Open: Microsoft Store -> 3 points at top right corner -> options -> deactivate app-updates.
After that, reinstall Equalify + Spotify.
I formatted my pc, after that i had the same problem and this way helps me to fix this issue.

This way only works for currently windows session, so after restarting pc, it will be automatically updated by Microsoft Store.

Next way is to deactivate Microsoft Store (only if you dont use it):

Think that’s the full solution for this issue. It works for me now, hope it will be work now for longer time.
My English isn’t the best, sorry for that. 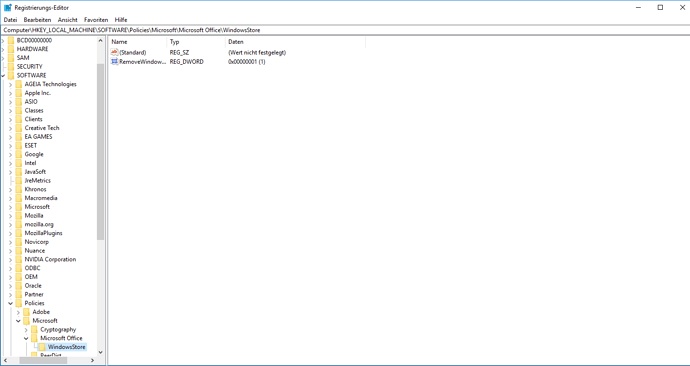 Got to love windows to make something so simple become so complicated.

Thanks for the reply! But unfortunately that didnt work =( 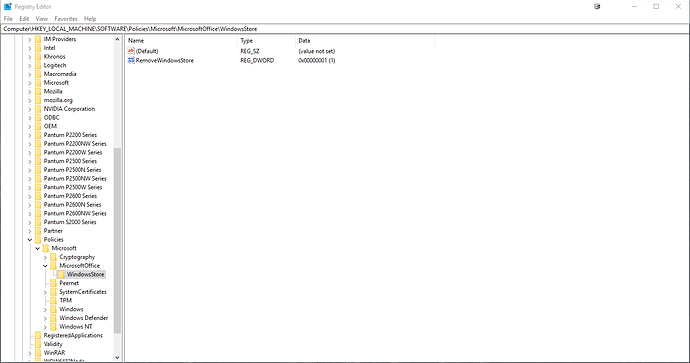 I’m starting to lose hope on this, i created a thread on spotify’s support forum, no response at all, i sent an email spotify support, they didnt reply. I can’t be the only one with this problem, i dont understand!! =(

Thanks again for your help

It took me weeks but i finally figured it out;

Step 1: I used the local group policy editor to turn off the windows store, here’s how to:

Step 2: I disabled windows system integrity check by opening windows power shell as administrator and entering “bcdedit.exe -set DISABLE_INTEGRITY_CHECKS” then restarting the computer. (this step allows you to follow step 3)

Step 3: I searched for “spotify” on my “C:” drive and deleted every single file with the word spotify on it.

Step 4: i downloaded spotify 0.9.1.57 full installer from here: https://filehippo.com/download_spotify/history/8/ , installed and ran it, waited for it to updated automatically, logged on and played a song and checked the version to make sure it wasn’t the windows store version, and it wasn’t

(after this step i restarted my computer and opened spotify, a window saying “migrating spotify data” showed up and the app auto upgraded itself to the store version again!

then i uninstalled and tried everything again plus step 5)

And voila! Its done! It works!!

This is what i have now and it wont auto update: 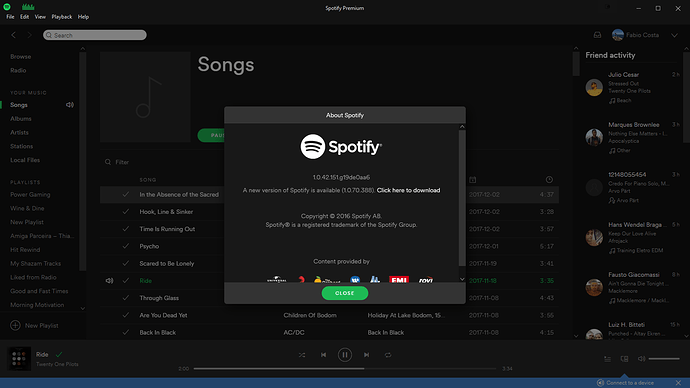 Thank you very much to all of you that responded to this thread! This was much harder than i thought it would be.

PS. sorry if my step by step is not clear, I’m new to this forum thing and english is not my first language

Good job getting it to work!
Its amazing how hard that was, and amazing how it kept installing the store version when you clearly installed the normal desktop version.

I will keep looking into it and see if i can get a solution that will work for the store and desktop version of Spotify. I already have some test versions that look promising!

Good luck! Spotify themselves recently enabled a feature on their win32 app where you could pass an argument and change the default device. However with uwp being forced here I can’t seem to find a way to pass the argument…

We shall wait and see!

I think, I found a solution. Try manually deleting the spotify folder located in Windowsapps folder after you uninstall spotify. Then install from the full setup.

It worked for me.

And also you’ll need to change the permissions. See also below link. to In Windows 10, files of all default apps as well as apps that you installed from Store are saved under a folder called WindowsApps located in the drive

This topic was automatically closed 25 days after the last reply. New replies are no longer allowed.