Problem description:
equalify does not work with spotify version 1.0.47.11.g37fe99b1 the green bars have vanished and are no longer at the top at the screen.

Any special software or hardware you might have installed:
none

Hello, Just restart Spotify (file->exit) and play a song and it will all be fine.

It can sometimes happen during the first Spotify launch after an update that Equalify does not load. 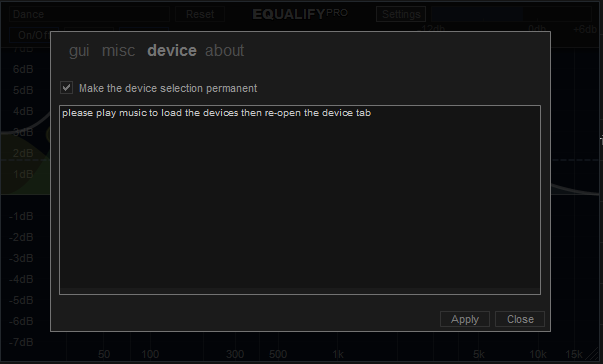 just did what you said and I now lost all my playback devices. also whenever I click apply in the settings menu it just crashes spotify. I’d fully reinstalled equalify and spotify but nothing fixed it

I’ll have a look and see if i can see what has changed.

I can confirm and replicate your issue.
Looking into a way to fix it now.

I’ve identified the issue: Spotify has changed how they play audio… which is causing issues when i’m basically hijacking their audio to do what i do…

I’m working on a temporary fix until i can make a permanent fix.
I should be able to get most features working (for most people) by the end of the day.
This temp fix will not get extensive testing though and could fail for some people…

If you could test this version and see if it works for you that would be great: https://www.equalify.me/dl/Equalify-1.1.6-installer.exe

Please let me know if it works for you - from the testing we’ve done this should fix all the issues.

The EQ might not load if you use the “launch spotify” option at the end of the installer, that option has also been removed now.

If you had it checked just restart spotify to load everything normally.

This version works flawlessly. all presets and device playback are all fully working.

Thank you for fixing the problem

No, thank you for reporting it!

Glad it all seems to be working as it should again, i wish spotify could give me a heads up before doing these kinda things

Are you a Spotify Beta tester as well?
Does not seem to be many people that has gotten the 1.0.47 version yet.

No i’m not a beta tester as far as i know.