Problem description:
When I open Spotify and play a song there are no bars visible in the left hand corner. I have tried speakers and headset

Any special software or hardware you might have installed:

Looking at the license database it looks like you have gotten it to work?

I’ve not heard of any issues with the G933 before, but that is the only thing that sticks out above.

in general, restarting spotify (file-exit) and playing a song is the way to make the eq pop up but you have done that.

I know you wrote the spotify version above, you didn’t omit “store version” from the version string ?

I install SpotifyFullSetup and Equalify1.4.3-installer. First day all ok. Next day the icon disappears and does not help uninstall and install everything.
Operating system: windows10
Soundcard: AMD High Definition Audio Device
Spotify version: 1.0.92.390.g2ce5ec7d
Equalify Pro version: 1.4.3
Any special software or hardware you might have installed: NO

You know you have to play a song for the eq to load, right ?

1.0.92.390 this is not from Windows store
I have tried again by opening Spotify but still no login prompt

The database says that you last used the eq today: Last used: 2018-10-31 19:43:40
A few minutes before writing the post above, are you sure there is no icon in the top left of the Spotify window?
like so:

Same exact problem. Spotify 1.0.92.390.g2ce5ec7d. No Equalify bars to click on. Just tried reinstalling Equalify, which completed successfully. After restarting Spotify and playing music, it’s clear to my ears that Equalify is still running yet I can’t access it to change the profile. I have different profiles for my external speakers and amped headphones and I’m no longer able to access the Equalify settings to change it.

^ Update: 25mins after posting this, and after listening to several songs, the Equalify bars are again back. I’m now more confused as to why they went away and how they came back after some time. Either way, I’m updating this to report it has somehow worked itself out (perhaps some time after reinstalling Equalify).

@johnashcroft61
I have no idea whats going on with your machine.

It has been active on 2 different machines, now only active on one. Last used around 12-14 hrs ago.
If you delete the license key, it will complain. Same if you deactivate it on the website.

But if its not working where you want it to work we can always just cancel/refund the order.

There is no reason for it not to work on your machine though, with the info provided in the top post. 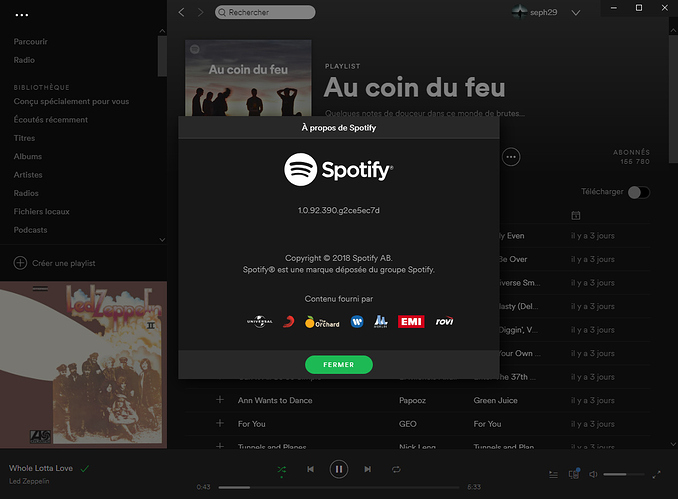 Any special software or hardware you might have installed:
No (worked well with banana before the spotify update)

EDIT :
after deleting the equalify2.eq file (in %appdata%\equalify) and restarting spotify, the icon is back

EDIT 2 :
In the new configuration file the DPI parameter is -1, in the old file it was 192
If I put -1 back in, the old file is working again

Hey, this thread wasn’t showing as unread so i forgot about it.

Hmm… so the DPI settings was set to 200% and i guess the button then would render outside the visible area for the button.

I’m fairly sure that was fixed in an earlier release though. At-least it is here.
200% button in a non-scaled spotify window:

Apparently i was wrong! That bugfix never made it into a release build.

I will try to push out a beta build tomorrow with multiple fixes relating to the EQ button.

Opt-in from the EQ->settings->misc menu.

Xonar soundcards are not supported. Workarounds exist in the thread above that will make it work.