If you find a new issue, bug, have an idea or just random feedback, please make a new thread in the beta category

I for one would certainly be interested in this feature.

Adding a link to this here

I would like to see the beta opt-in built into the program similar to Steam or VyprVPN: Steam Open beta program: [image] Closed/Private beta: [image] VyprVPN: [image] This would make a great improvement because if you have a beta that is doing good and is almost ready for release you could allow the open beta, similar to the first steam picture (where anyone that has the program can opt-in) and if you have a more experimental/buggy build you could give that to your closed beta testers li… 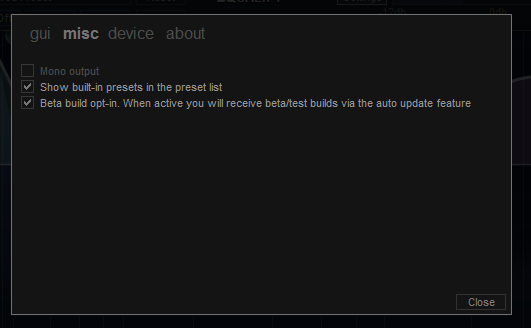 Looks like ESET Nod32 and F-prot(/Cyren - they are the same company) is falsely reporting the beta as malicious.

I’ve contacted both companies and sent them all the required files to get it fixed, but everything takes time with big companies.

Hopefully this will be sorted out within a few days!

Updated:
Still no response from ESET but f-prot/cyren has replied:

Following receipt of your False Positive (FP) report, we have identified it to be wrongly detected as a malware. This FP is now fixed, and this file will no longer be detected as malware.
Ikarus showed a false positive as well and analyzed,responded, and fixed their definitions within hours.

Update2:
ESET nod32 has not made sure the file does generate a false positive, but they did not reply. Atleast now i know that they do watch the submissions…

Update3:
Everyone has responded and analyzed and removed the false positive. So the beta is now available for download on the members page of the website!

Downloaded the new beta that you mentioned a few hours ago.

Loading up spotify, I can’t see the EQ that would normally show up.

Any logs that are saved anywhere that may be able to give you more information?

Downloaded the new beta that you mentioned a few hours ago.

Loading up spotify, I can’t see the EQ that would normally show up.

Any logs that are saved anywhere that may be able to give you more information?

Did you install the 1.1.0 while spotify was running?

Everything was closed. Manually downloaded 1.10 Beta.

Installed “Successfully”, got the “Thank you for registering/using euqlify” [blah blah blah], but the Equalify button does not appear next to the green circle.

*EDIT
Really wanting to listen to slipknot with the bass boosted just a little.

I’ve had to re-active a new key for the beta. All is working.

Did it show up at all?

@munkeywaxx Please try logging in again now and it should work.

Turns out in my eagerness to get the beta out i saved one of the files on the server with one wrong line in it that was causing the keys downloaded to be invalid, and in turn the EQ would not work/show.
Please check if it works now, and let me know

Yeah, sorry. Went down the pub.

Turns out in my eagerness to get the beta out i saved one of the files on the server with one wrong line in it that was causing the keys downloaded to be invalid, and in turn the EQ would not work/show.
Please check if it works now, and let me know

Anything you recommend I do to ensure nothing’s broken?

Great that it works, that was my bad…

You could restart spotify a bunch of times to make sure you will not need to re-generate the key that you had issues with in the old version.

You can also go to the settings->about and make sure the check for update link works.
Other than that just play around with it, It really should be very stable!

Update link works.
Only real time I can check the re-generation would be if I turned my PC on and off a few times. Not happening tonight at least.

When I boot up over the next few days, if anything pops up, i’ll let you know ASAP!

Thanks for taking the time.

AVG Antivirus Free also reports a false positive for the dsound.dll. I had to configure a exception, now it works.

The license problem after each pc restart seems gone here.
Tried a few restarts, no problems.
Thanks

Thank you for reporting it.
I already contacted AVG yesterday, hopefully they will do something about it ASAP!

All is good. Had no issues during use and no more issues on startup!

Good that all is good!

The non-beta will still take a while, almost noone that uses the beta has bothered giving any feedback, meaning i still know (almost) the same as i knew before the beta started.

And considering i’m still having issues with AVG, they arent responding at all to mail or the false positive form i’ve sent in twice, i will have to get that sorted before i can release it as “stable” release.

I was having some odd freezes (recoverable, upon minimizing all windows & opening Spotify again) under windows 8 with the stable version - should be able to give the beta a shot next week and see if that improves the situation.