Hello guys,
recently I switched to this sound card. The old card was a Sound Blaster Audigy Titanium Fatality Campion.
With the old card Equalify works great.
But now it didn’t work.
I’ve tried the solution posted on the “Asus Xonar issue” but without success.
What should I do?

I do not know anything about that card, but from what i saw on the website ( https://www.asus.com/Sound-Cards/Essence_STX_II_71/specifications/ ) it has ASIO support.
If its run in ASIO mode it bypasses the normal windows audio output and Equalify will not be able to intercept the audio.

I don’t know if you can turn off ASIO mode or set the default output of windows to be a non ASIO output ?
Or it could be that it has the same type of issues as the XONAR drivers, and requires a service to be shut down.
I would need a list of all programs that start when your computer boots to verify the last one.

I would love to troubleshoot this issue with you if you have time some day. There might be an easy fix, like the one for the older Xonar cards. But like i said in the previous post i will need some information, and we’d have to do some testing, to figure that out.

Thank you for the quick answer.
Later I will have a bit of time and I will show you wich services are starting.

So,
this is the list of the starting programs 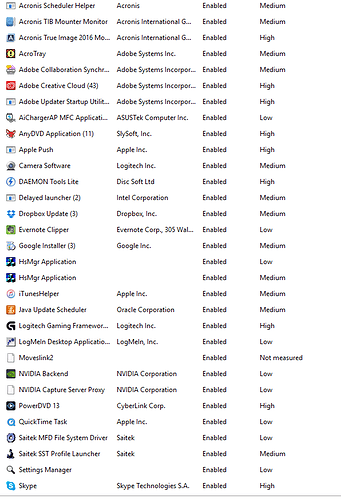 Hey, i’ll send you a PM and we can take it from there.

Hey guys, just checking in to see if there’s been any progress with the STX II

Not much progress yet. I’ve been away for the weekend, so haven’t had a chance to look at it until today.
Sent some ideas to @Vinnie in PM that we can test. But it doesn’t look like the STX II does the same thing as the older Xonar cards, so cant apply the same fix.

Ah ok, gotcha. Thanks for the response.

I’m still unsure of what card I should get, because I really rely on Equalify, haha.

I’ve tried to uninstall Overwolf but without success.